The modern startup landscape is built on cooperation. The rapid expansion and increasing accessibility of new technologies which begun in the 1990s hit its peak around the mid-2000s, setting the stage for a new way of doing business. Getting a startup off the ground is much easier than it was thirty years ago precisely because of this new paradigm.

The biggest advantage modern startups have over their historical counterparts is their ability to easily network with other companies from around the world. Forging business relationships with others has never been so easy.

It’s not unusual for companies from the opposite sides of the globe to cooperate on projects without representatives ever meeting in person. Indeed, many new startups are created explicitly to serve foreign clients.

Here, at App’n’roll, we are big fans of this way of doing business. We feel a strong sense of solidarity with fledgeling startups. Companies at the very beginning of their respective journeys make up the majority of our client base, and we thought it would be a good idea to share some of our experiences.

These are the stories of some of the most interesting projects we had the pleasure to help, and how we approached them.

Out of all the projects we worked on, the collaboration with Mudita remains the crowning jewel of our portfolio. 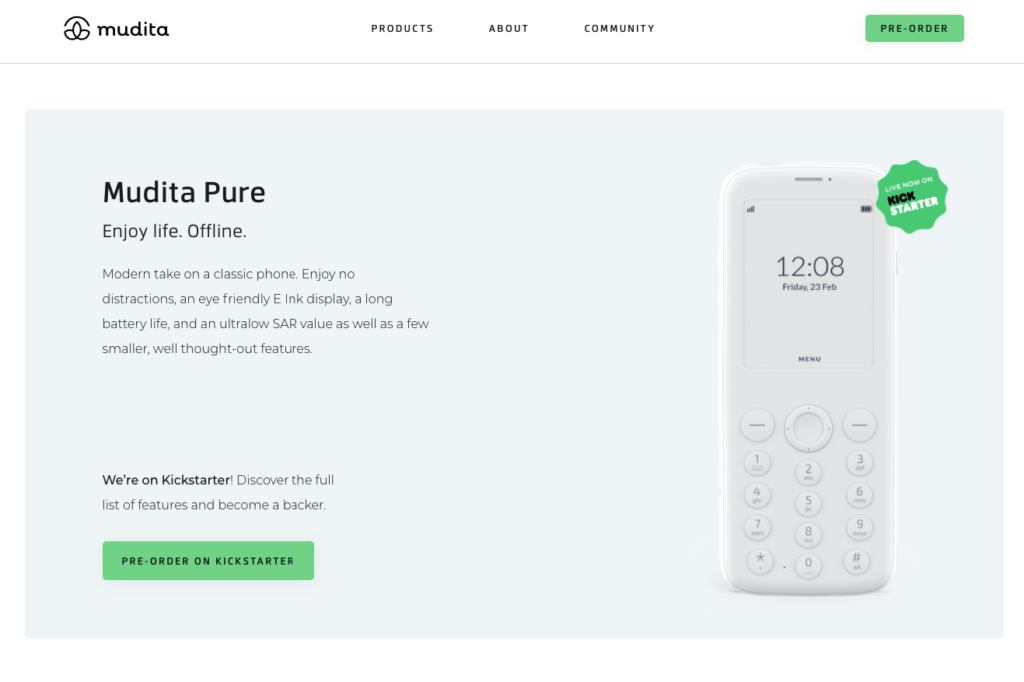 The brainchild of Michał Kiciński, the co-founder of CD Projekt (known internationally for the Witcher and Cyberpunk 2077 video games), Mudita is a tech startup unlike any other.

Fully dedicated to promoting a calmer, more conscious lifestyle, their first product is Pure – a minimalist cell phone designed specifically as an antithesis to the modern smartphone.

It recently launched its Kickstarter campaign, which met its $100,000 goal in 64 minutes. 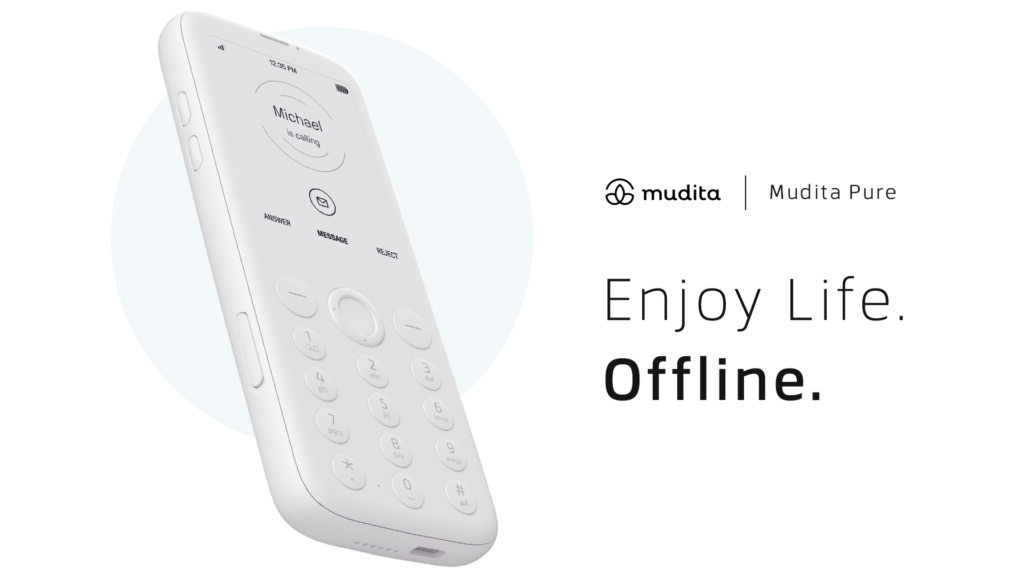 Mudita reached out to us to create all of their visual branding, website design, and other elements of their brand identity. When we took on the challenge, we immediately recognised that we were working with a unique partner – we immediately clicked.

We started with a series of workshops with Mudita’s marketing team, during which we established the full scope of the project, as well as the key principles that our designers would use when creating their identity.

During these meetings, it quickly emerged how much emphasis Mudita places on even the most minute details. Mudita’s Head of Marketing and Sales, Katarzyna Bocheńska, wanted the website to have a minimalist and calming feel to it.

As she described it:

“Digital users brows through dozens of websites everyday. When they enter Mudita’s website,

When creating the Mudita website, our developers remained in constant contact with the client, ensuring their full satisfaction at every step.

Eventually, we delivered a minimalist design which would make Dieter Rams himself proud. Minimalism was the primary principle we adhered to during the design and implementation process, as it is well in-line with the values Mudita itself expresses.

We aimed to deliver the maximum value to the user with minimal obtrusions. This approach does not only extend to the user-facing side of the website; we aimed to keep the code itself as simple and expressive as possible, in order to make future maintenance and expansion a breeze.

The work we did with Foap remains one of our proudest achievements.

Foap investors included Gary Vaynerchuk (Vayner Media). The client expressed full confidence in our expertise, allowing us to completely take over their product, a global photo and video licensing platform.

We decided to overhaul the whole thing: we rewrote the API from scratch, using Ruby on Rails.

Compared to the legacy platform, it allowed us to achieve more performance at half the resource cost.

Additionally, we rewrote their mobile apps with a particular focus on delivering the best user experience (UX) possible. After a long brainstorming session, during which we analysed as much customer feedback data as possible, we finally settled on a UX design which we (and the client) felt comfortable with.

As a result, the platform is now much easier to scale.

We are proud to mention that Foap is now enjoying a comfortable spot on the Top 10 list in the US App Store.

Maybe we can help your startup grow with our product design & development services?

Let us know via Chat or on hello@appnroll.com

Vooom: one mobile app to ride the city

Getting around cities is becoming more and more of a challenge these days. Private car ownership is looking to become a thing of the past – after all, who enjoys being stuck in traffic jams?

Rising fuel costs, environmental concerns, and the smug looks on cyclists’ faces as they pass by cars stuck in traffic all contribute to the current trend of moving towards ride- and vehicle-sharing apps.

However, much like the current social media market, the various -sharing spaces are becoming rapidly balkanised. Every city has at least a dozen different options for getting about: from public transport, through ride-sharing services like Uber and Lyft, to electric scooters, bicycles, and cars available to rent through ten different smartphone apps. If you want to dedicate a lot of time to it, you could save a lot of money by using the most optimal method of transport.

What if you didn’t have to expend any effort, though?

That’s where Vooom comes in. It’s an application we helped to develop, which aims to optimise the new urban transport experience. By aggregating every service available in a given city – from ridesharing applications, through public transport, to rentable vehicles, they’re all available through the same interface. Users can easily compare different options and choose the most optimal solution every time. 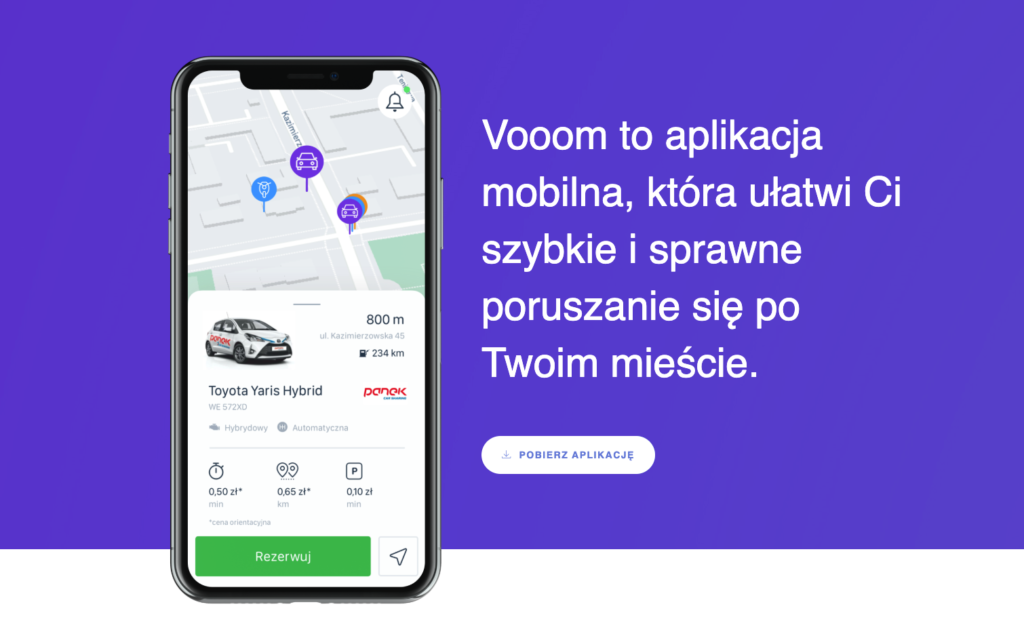 We created all of Vooom’s visual branding, as well as iOS and Android application itself. It was a challenge, to be sure – integrating so many different providers into one app was not an easy task.

However, through the smart application of good project management practices, we got the job done, and in style!

It’s still being actively developed and it continues to gain in popularity as more and more services are added.

Dongiving* is a social donation platform which allows its users to donate to NPOs and see the real effects of their donation, as well as their impact on their friends.

The client asked us to take care of every bit of the product design (UX and UI) of the project. 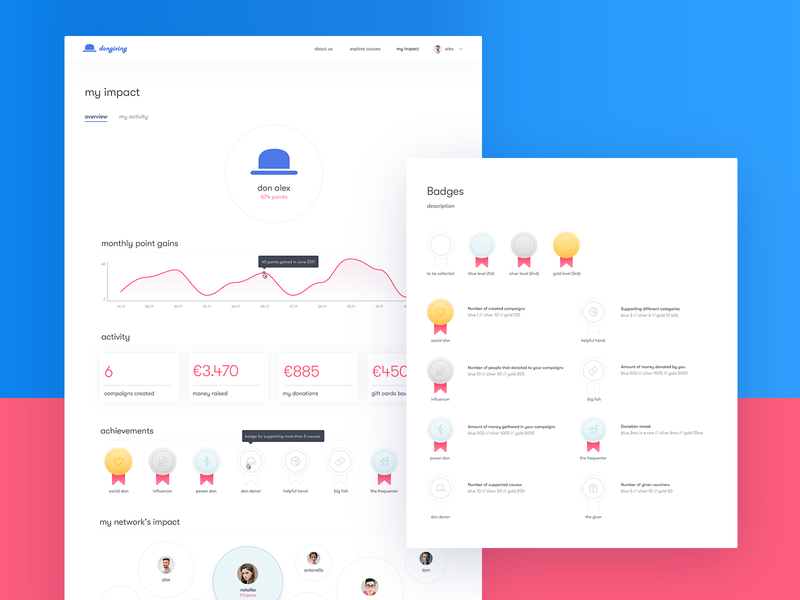 We started the process by conducting several meetings with Dongiving, aiming to understand their needs as thoroughly as possible. Because of this, we were able to work out a clear action plan, which enabled us to make rapid progress while remaining in constant contact with the client.

The initial workshop stage yielded three personas, for which we created more than sixty user stories. These were then divided into eight sections, upon which we based the entire information architecture of the app. Subsequently, we moved on to preparing wireframes for every single view – sixty in total – which were the basis of our implementation.

Although our initial designs described the desktop version, responsive design was on our mind from the very start, which informed some of the choices we made. 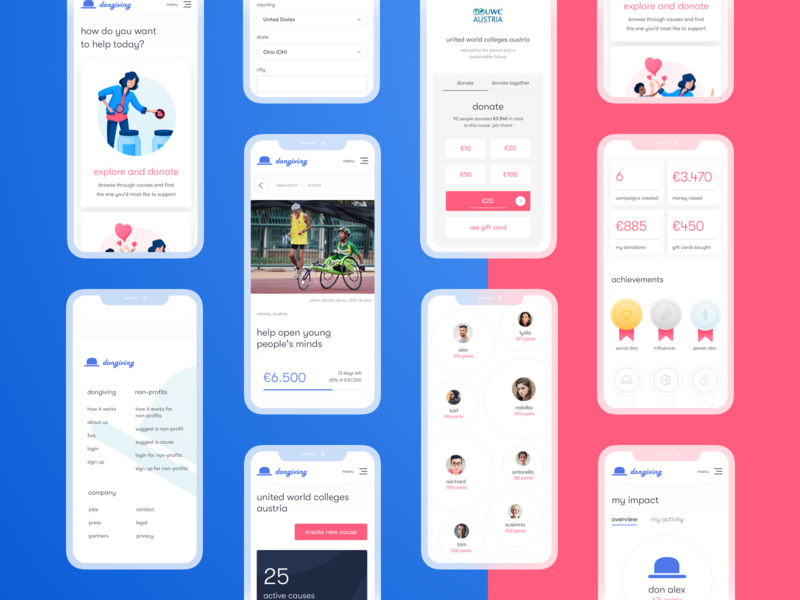 Once we had a working implementation, we moved on to user testing.

We interviewed nine people over the course of three days and received a lot of actionable insights and feedback.

Most of it concerned our copywriting, which we improved during testing until we reached satisfactory results.

As a final touch, we decided to spruce up the design with unique illustrations for each section of the app, so that the end user always knows the intent and purpose behind each functionality. 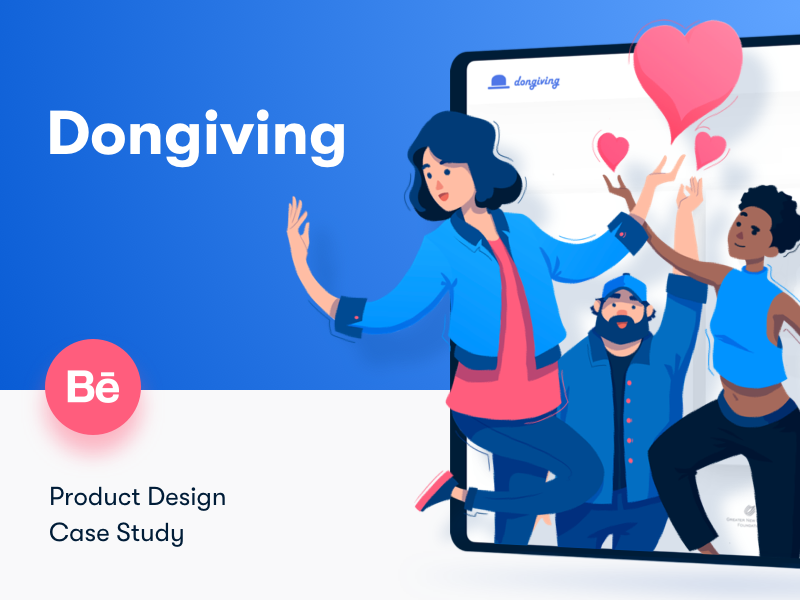 Zuper is a German FinTech startup which aggregates all of your financial accounts together in order to help you track your spending and make budgeting easier.

We were approached by Zuper to create their product from scratch according to their specification.

Our responsibilities were broad: from the UX/UI design, through the backend and API development, infrastructure, all the way to the mobile apps.

Since we had free reign over the entire implementation, we strived to deliver a holistic, internally consistent solution. 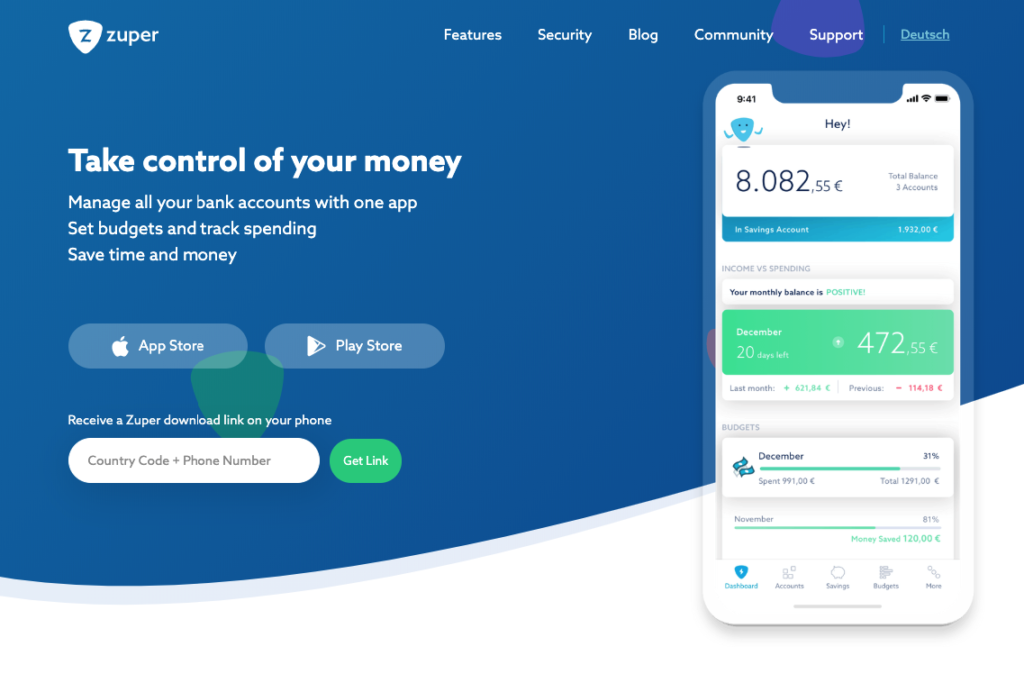 The project as a whole (as well as its individual parts) were designed with several key principles in mind. Above all, we strived to keep the platform efficient, scalable, and fast. We devoted the most attention to the infrastructure – after all, in FinTech, you need to be both fast and secure.

Simplicity, as it turned out, was the key to success: by remaining committed to the principles of scalability and simplicity, we effortlessly achieved a level of security sufficient to receive a TÜV Saarland certification.

We also achieved PSD2 compliance through the same method. Infrastructure-wise, the platform is effortless to maintain, easily scalable, and blazing fast – just how we like it! 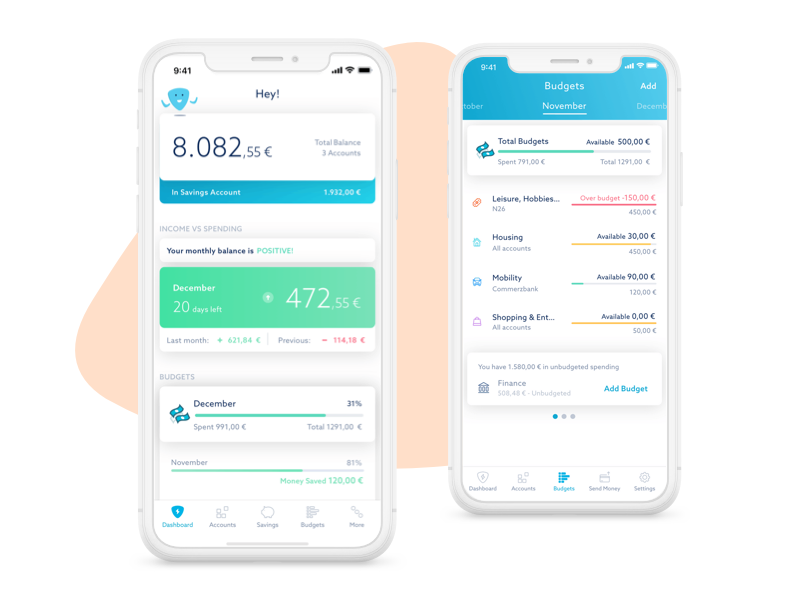 We applied the same principle to the user-facing aspects of the product. The mobile apps were a particular focus for us. After all, it doesn’t matter how well-tuned your infrastructure is – the user will only see it through the prism of the app. As such, its performance and speed are the most important aspects that every brand needs to get right. We took extra care to ensure smooth user experience, even on low-end devices.

Maybe we can help your startup grow with our product design & development services?

Let us know via Chat or on hello@appnroll.com﻿

We’d love to hear from you!